You Are Here : HomeProfile of CompanyBoard of DirectorsSyed Ahmed Mahmud 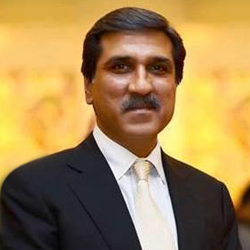 Syed Ahmed Mahmud is the Director/Chairman of JDW Group. He comes from a family with a long standing political legacy.

His father, Makhdumzada Hasan Mahmud, remained a political leader at the National level. He served as Chief Minister of Bahawalpur before the creation of one unit.

Mr Ahmed Mahmud has been elected to the National and Provincial assemblies of Pakistan several times. He served as Minister of Excise and Taxation, Punjab from 1988 to 1990 and as Federal Minister of State for Environment from 1997 to 1999.

He also served Rahim Yar Khan District as Nazim from 2001 to 2005 during which time many new and important initiatives were taken for the development of the District.

He served as Governor of Punjab durning the years 2012-13.

He has served as the member of Board of Governors of Aitchison College Lahore.